An Ode to Italy

Last night I stood sweating over pasta sauce in the determined attempt to perfect it without an Italian. As I gently folded the ragu, allowing steam to billow and steam my face like a meaty sauna, I looked for the creamy consistency Alessio (aka Alex) had taught me, and breathed in to smell the deep fruity notes of red wine, meanwhile (floating in an Italian dream) managing to forget the garlic.

Seabass with potatoes, tomatoes and olives 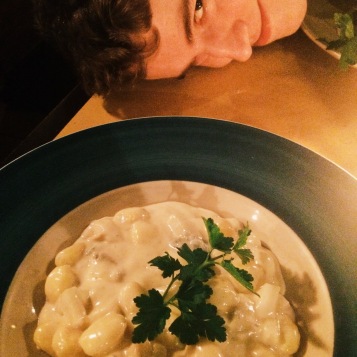 Gnocchi with gorgonzola and pear and Calum
The different respect and love for ingredients across the world always surprises me, particularly the diverse attitudes in Europe alone. It takes skill and practice to tease out flavours yet Italians accomplish this effortlessly, using only the freshest ingredients with strong, concentrated flavour, good olive oil and seasoning.

The smell of the bolognese last night was of beef, a smell to which I am accustomed thanks to the cottage pies with thick salty gravy I’ve eaten throughout my life. Hearty British grub, and so warming on a cold night under its pillow of mashed potato. Once I added tomato paste and red wine to the pasta sauce, however, the scent filling the kitchen was no longer a reflection of British produce but an amalgamation of cultures. The tomato contributed a rich sweetness, softening the savoury salt of the mince. The red wine fizzed and sizzled before burning off the harsh smell of alcohol and leaving behind a dark full-bodied depth of Chianti grapes.

Calum bought me a cookery lesson for my birthday. We marched around the Florence streets at 8:55 on Wednesday morning, finding ourselves outside Fendi more than once, before Calum bought internet data and we ran to the meeting point with a minute to spare. The bitter cold of January hadn’t kept all the tourists at bay, we usually saw them in lion packs lead by a small meerkat-like tour guide and a voice amplifier, however, we were alone for our day’s cookery class (a much more brutal fight to the death for the role of teacher’s pet). We met Alex from The Food and Wine Academy, a passionate young chef who had worked all over the world, cooking with unique ingredients to create diverse flavours, who claims he had the best pizza of his life in America and is also a bass player in a band. He took us to Mercato Centrale, introducing us to tripe, trotters and a majestic pig’s head just inside the market’s entrance.

An inherent principle to Italian meat cooking and butchery is to use the entire animal. Lampredotto (tripe) is cheap and has been sustaining Florentines for centuries when the price of good meat increased. Other parts of the animal, such as the ears, tongue and tail, were discarded by the rich when butchering their dinner, and thrown in the river. Further down they were collected at the prison where this leftover meat was boiled fiercely for hours and thus sustained the prisoners. The tradition of boiling the remaining animal still continues today.

Alex darted from wineshop to delicatessen, butcher to fishmonger, Calum and I jostling behind him as he spouted facts about the region, the classifications of wine and admired the various cheeses and cured meats. Collecting a small secret package from the butchers, he led us outside, through the chilly streets to the school. After donning our aprons, Alex taught us how to make Italian bolognese and cherry tomato sauce, pouring in natural stock he made from carrots, onion and celery. The package revealed mince, ground just for us, its thick chunks crumbling and frying in its own juices. As it slowly simmered, we energetically rolled out paper thin sheets of pasta, Alex commanding Calum to, ‘use the Force!’ in response to Calum’s Star Wars sweater. Stretching the pasta was exhausting, most likely because I don’t exercise very much, and rubbed my hands red raw but I only stopped when I was satisfied with my wafer-like result. By piping pureed potato onto a strip of pasta, folding and crimping it tightly we made ravioli. Once it was cooked in salted water, Alex sautéd the pasta with the ragu, first adding parmesan, salt, olive oil and a dollop of the cooking water. The sauce thickened and shone, clinging to the pasta pockets like a slinky dress. He slid it all onto a plate, sprinkled with extra cheese and we dished it liberally onto plates, devouring it with a glass of Chianti in hand.

Italian food has no pomp or extravagance. It’s purely fresh ingredients cooked simply, allowing the flavours to be intensified while they simmer and stew.

This post isn’t so much a point of interest or discussion, more of a rambling tribute to a culinary world I love. Unfortunately I was too preoccupied bashing pasta dough and eating to take pictures but here are the other superb dishes Calum and I preyed upon like starving prisoners while in Florence. 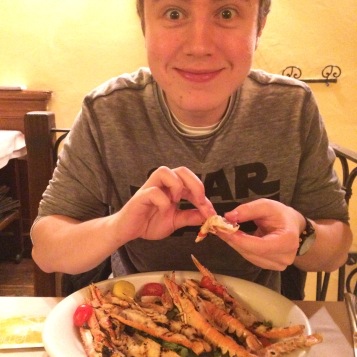 A happy Calum with his langoustines 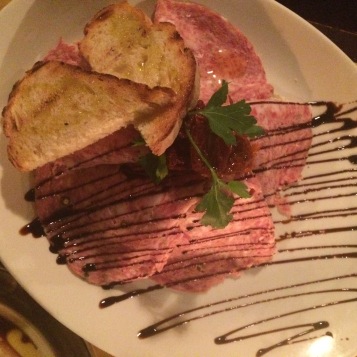 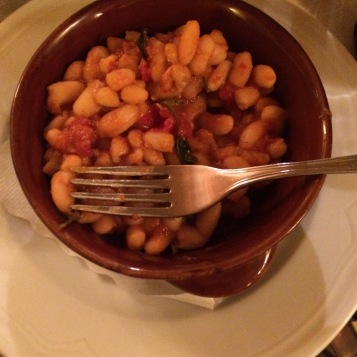 White beans with tomato and sage