Welcome to the Island

There is no direct career path for food lovers. My career has taken me on many surprise twists and turns, each offering me new skills and learning opportunities. There is always something new to master whether it’s an interesting flavour combination or a trick for chopping herbs.

This month I have learnt many things as a chef. Particularly the difference between my previous role as restaurant chef and now as private chef. And also, how to kill a lobster.

Private cheffing sounds awfully glamourous. Some are jetted off to a remote island with blue oceans sparkling like sapphires, for some incredibly famous person that it’s against their contract to name, where they’re constructing intricate Michelin-starred quality food, before sunbathing on white sand with palm trees swaying.

In our case, Georgie and I were delivered to our island destination (in the south of England) by boat on one of the choppiest sea crossings I have ever experienced. Our boat driver and island horticulturalist, Dave, repeatedly said, ‘This is so unusual for this time of year!’ as he battled in our flimsy boat while waves crashed against the windscreen like battering rams, the windscreen wipers flying pathetically in defence.

Surviving the crossing being our first achievement, the next was to actually cook for our clients and their guests. They flocked in in droves the next day, interrupting our nerve-wracking but peaceful afternoon preparing for our first meal: goats cheese bruschetta with peaches, blackberries and basil infused honey, pistachio crusted salmon with fennel salad, roasted tomatoes and buttery baked new potatoes, then a three-tiered Pimm’s pavlova decorated in Pimm’s syrup, candied orange slices, strawberries and mint. Little did we know that relaxing day would be our last.

That first evening and the following day’s breakfast and lunch gave us a taste for the next three weeks. Daily buffet-style breakfasts with bacon, sausages, tomatoes, eggs or pancakes, alongside homemade granola and compote, yoghurt, homemade bread, and at least five choices of jams and marmalades from the island stores – made every year by Ness, gardener and preserver extraordinaire, Dave’s wife, and owner of a loving Alsatian. Lunch had us trotting off to Ness’s immaculate vegetable patch, directly under the afternoon sun with butterflies fluttering lazily over the cabbages. Here we would gather and forage, pulling up carrots, leeks, celery or onions, picking blackberries, tomatoes and parsley, or meekly returning to Ness to ask for help collecting kale or lettuce. The vegetable patch was our daily jaunt, our vegetable aisle at the supermarket, yet, meanwhile, all our other supplies were quickly dwindling. 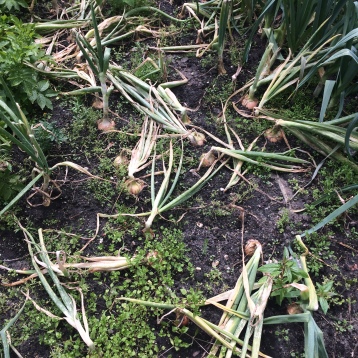 The only solution was a food delivery. The island had enough fruit and veg to see us through but meat, dairy and store cupboard essentials such as sugar and bread flour were more difficult to come by. We would make our way back to the mainland where bags of packaged food were left for us at the harbour office. The staff let us through with the off-hand comment, ‘There’s a lot of bacon in those bags.’ No one realises how much food you need to buy to cook for sixteen people, especially bacon.

Lunches consisted of leftovers – slices of beef marinated in a cinnamon and clove rub, or chunks of lamb from kebabs tossed with the spicy roasted butternut squash all from the previous night refreshed with lightly toasted pine nuts, served with bread, pickles and chutneys, and fresh salads from the garden. Thanks to my love of leftovers, and my mum’s favourite saying that I can ‘scrape the back of the fridge’ – not the most pleasant imagery I’ll admit – I was in my element concocting simple flavourful dishes with Georgie as we regularly consulted ‘The Flavour Thesaurus’ – ‘we have some blue cheese, what does that go with? Ooh celery, and blackberries, this salad will be delicious…’ – a must-buy for anyone obsessed with cooking. 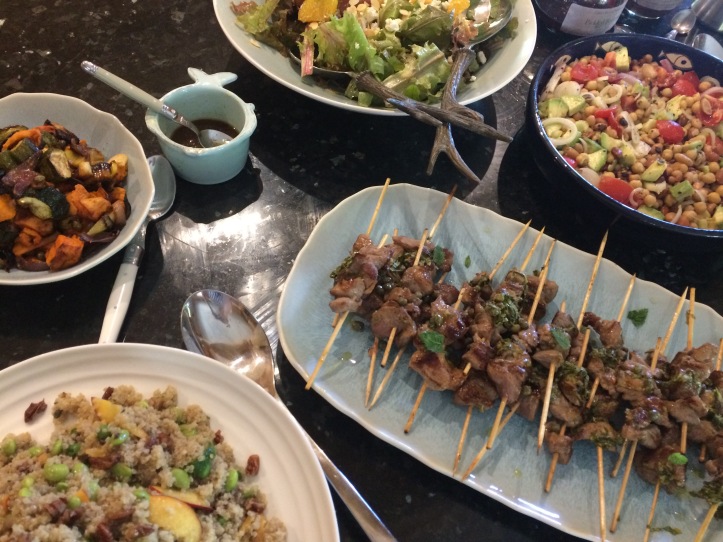 What with our coastal location, we were excited to cook seafood. My love of seafood is unprecedented, just the thought of heating prawns on the barbecue, slathered in garlic butter until its juices were sizzling is enough to make my mouth water. Soon enough we had a request for lobster. I immediately paled. Cooking seafood is all well and good until you pick a shellfish you’re expected to kill first. Georgie, veteran lobster killer and master of lobster dishes, took me under her wing. To celebrate our second week on the island I bought five plump inky blue lobsters, their claws waggling against their restraints. That afternoon Georgie tutored me; it’s crueller to boil a lobster than immediately stick a sharp knife through their heads, she said. She placed a lobster on the chopping board, I didn’t watch the first one, perfectly content with unloading the dishwasher, but for the second I was her audience, wincing as the lobster waved its legs and claw in apparent protest. Georgie swiftly plunged her knife through the lobster’s steel-like armour with a resounding crunch, before spinning it around and slicing through its back. The third lobster was much worse; enormous, its black shiny shell unfathomably strong and fit for battle as we both tugged on the knife willing the process to be quick.

That night we served lobster thermidor having finally put the lobster out of its misery. Having scooped out the roe and the tomalley – the green or coral coloured guts which are, in fact, edible – Georgie cooked them in a pan with butter until they were shocking pink and we grilled the lobsters for five minutes to cook their meat and turn their shells vermillion. Doused in creamy sauce and grated cheese they were flashed back into the grill for the cheese to melt and bubble. Served alongside were chunky chips and a simple samphire salad, fresh from the beach where we’d collected a basketful that afternoon. 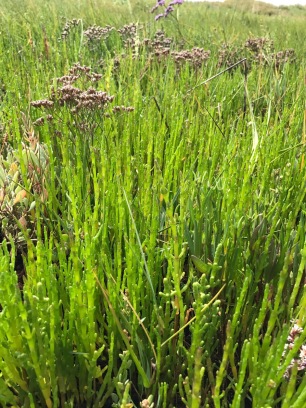 Learning to work with what you’ve got was the essential lesson I took away from this job. A kitchen with two agas, a gas oven that never quite reached the temperature we required, and then a wood-fired pizza oven outside were our main methods of cooking. Slightly wary of the agas and pizza oven we favoured the gas, using it to cook our large joints for roasts, although somewhat suspicious at first as to why our joints of ham basted in a ‘carrot cake’ marmalade –  sugary and sticky shredded carrot spiced with cloves – weren’t crisping or caramelising after extended periods in the oven.

Mornings were all about planning: waiting for the agas to warm meant trays of bacon, sausages and our boule of bread were squashed haphazardly into the small gas oven with only the top shelf receiving the blast of mediocre heat. That said, we are now connoisseurs of lighting an aga, ensuring the flame doesn’t immediately go out, and feeding the heat to reach the dizzying heights of 200C! We were introduced to the pizza oven with an initiation of cooking pizzas for twenty. Handed a pizza peel and a floppy doughy pizza we worked with our instructions, to slip them into the scorching oven and turn them regularly to ensure an even bake. Pizza peels are ungainly at the best of times, I learnt quickly not to stand directly behind Georgie as she thrusted the peel in and out of the oven door thanks to the accidental stab to the guts. My first attempt (luckily on my own pizza) resulted in a fine dusting of grey ash, a black pepper substitute if you will, thanks to overzealous pushing towards the white-hot logs. Soon enough though we were producing golden and crisp pizzas, the cheese molten and stringy, ready to be sliced and gobbled up by the eager guests. 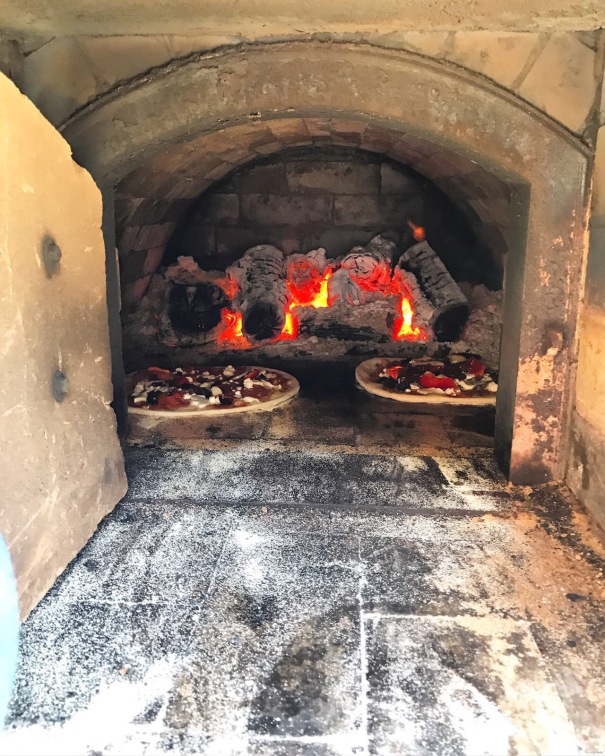 Working as a private chef kept me on my toes, hungry to try new recipes and treat the guests to something different and flavourful. Consulting the fridge and our recipes, planning together, bouncing ideas around, preparing, cooking and baking, plating up and finally serving was a day-long process but one we relished. Each day was a rollercoaster, but the food was the focus and no matter what problems arose we worked together to give our clients a delicious experience. The twists and turns of this career path will always surprise me, but as long as I’m cooking, I can’t wait to see what it will bring me next.

When in NZ find a nice boy who's happy for you to sit on his lap for an hour and would rather look at you than the beautiful view 💕☺️ @gaylordszt (📸: @elliesmeets @caittyler )
Oh December, what a merry month you were, Christmas Day feast with da bros / South Island beach dreams (before those horrific burn lines appeared 😬) / ma bae's masterpiece, a Bruce Bogtrotter chocolate cake covered in strawberries / partying with this lovely mad crew at work / Christmas croissant pudding with nectarines and blueberries / sunsets and fireworks, and starting 2020 with the first of many drunken nights with this wonderful human 🌹 @gaylordszt #newzealandchristmas #travel #wellington #brucebogtrottercake #breadandbutterpudding #newyear
I feel like I'm cheating on traditional Yuletide food with all these flirty strawberries and apricots around. Strawberries at Christmas time, whatever next. Chocolate chip panettone, Christmas cake ice cream bedecked with roasted summer fruit, recipe now up on my blog 🍓🎄 link in bio #newzealandchristmas #summerbreakfast #christmascake #itfeelslikejune🎄🎅🏼
Wellington, I've got about 300 pictures of your sea and sunrises. As far as new homes go you're nailing it ♥️ Keep it up - you're heavenly #wellington #newzealand #travel #surfsup
The greatest day when I decided to change career paths and become a Hobbiton tour guide / Lake Rotorua looking drop-dead gorgeous / a sulphurous sauna and I still smell two weeks later / 1 second after being drenched by a tidal wave while white-water rafting / towering redwoods / snowy and innocent Mount Doom / the gang in Wellington 🙌🏻 #newzealand #rotorua #wellington #mountdoom #whitewaterrafting #hobbiton #straytravel
The look of pure joy! Happy birthday to the Mother of Bunnies @fimitchy 🐰💕🥳🙌🏻 just give my sister a petting zoo, a piece of old carpet and a rabbit to cuddle and she's a happy bunny! Start em young I say although I doubt our parents will agree 😅
%d bloggers like this: