Cooking vegan meals is more fulfilling than I thought.

This is a statement I never thought I’d say.

If you are a reader of this food-obsessed blog you will already know it’s unlikely I have partaken in this month’s Veganury, especially as my last post described my recent meat spree in graphic and visceral detail, and also because this blog does not offer dietary advice or interesting meal plans – it is literally just here for me to tell you what I eat. Which is, evidently, a lot.

So no, this isn’t a blog-post describing the effects of the Veganury lifestyle, or that middle of the month cop-out after drunkenly eating a pepperoni pizza, but it is to offer a curve-ball.

Cooking vegan food is easy. Eating it is enjoyable. Without realising, a lot of meals are vegan whether it is hummus and crudités, soup, a comforting plate of toast smothered in jam, fluffy couscous mixed with orange zest, mint and pomegranate molasses. If you’re cooking for one or if you’ve just got vegetables in the fridge it can be just as satisfying eating a vegan dinner as eating sausage and mash (although sausage and mash is very good).

That said, I have an issue with Veganury. It is advertised as a life improvement strategy. Immediately after Christmas, we are targeted by companies and businesses with adverts pronouncing the slogan #newyearnewme, whether it’s Wagamamas claiming you should have a ‘positive 2018’ or Retinol’s new year skincare resolution. Our insecurities are used as advertising fodder to great effect and we instantly jump on the self improvement-bandwagon. We hit the gym with a religious fervour (and take pictures), we whiz up some ‘detoxing’ green juice (and take pictures), we restyle our hair, we quit smoking, we try anything to feel virtuous and better about ourselves, and it always reinforces that sense of fulfilment if we get a few likes as we do it.

And now, there’s a time-frame. By tagging ‘January’ in a phrase we only have to restrict ourselves to this self-loathing for one month. Seemingly this makes it easier, however, January fads, and food fads in particular, are a lot of pressure to maintain. Without a doubt, we all feel guilty after all the cheese, wine and mince pies but, let’s face it, January is a miserable month. We trudge back to work in the bitterly cold, dark mornings and, after a month full of excitement and celebration, the taste is exceptionally bitter. In the case of Veganury, we are considerably altering our meals, removing essential food groups and depriving ourselves of nutrients which we need in deep winter, and, as it’s only for one month, there is less incentive to take the necessary supplements. I ardently agree with Tamasin Day-Lewis when she says, ‘a fast, or famine, leads to a feast.’ Restricting your diet to a time limit could mean the hard work you have achieved in January may be ruined by February.

Instead, take these restrictions and time-frames with a pinch of salt. To maintain Veganury you need wiggle room, even if it’s just one vegetarian day a week because you simply love macaroni cheese. Use this as an opportunity to challenge your cooking and experiment. Stock up on lots of interesting foods in jars, which is basically the crux of vegan cookery – olives, capers, tahini, coconut oil, mustard – which can be tossed into salads, stews and soups, and buy a spice rack as you’ll soon have new favourites to add to your collection. Soon everyone’s hashtags of #newyearnewme won’t show someone flexing at the gym, instead a plate of delicious homemade vegan food as we don our chef hats to become pros in the kitchen. Here’s to a new year of good food and personal challenges!

In the eloquent words of Monica Geller: ‘In your face last year me!’

Carrots with rosemary and preserved lemon 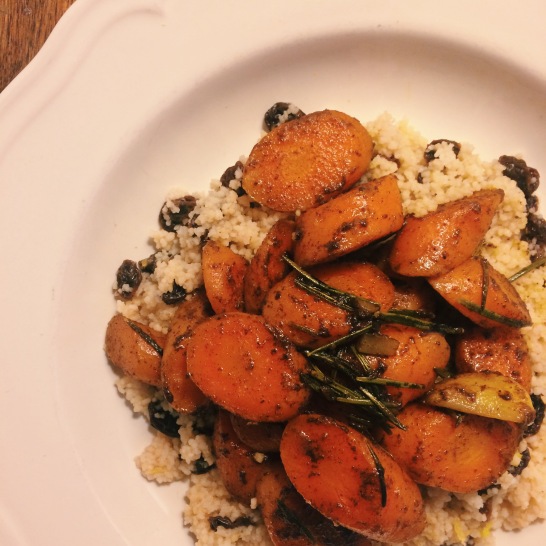 It is so handy to have a jar of some kind of useless pickle or marinade at the back of the fridge. I had been looking past this jar of preserved lemons for weeks – they are almost definitely out of date – until I only had them, carrots and rosemary sitting on my shelf. I decided to see what would happen if I mixed them all together and now it’s my easy, after-work dinner.

This recipe is based on the fact my oven is utterly useless so if you have a functioning oven you can either try it this way or roast the carrots halved length-ways with garlic, rosemary and spices in some oil until buttery and tender. Once cooked stir in the preserved lemon and serve.

If this is your vegetarian day, eat with a dollop of garlicky yoghurt.

Last August I arrived in New Zealand, bright-eyed, bushy-tailed and pretty jetlagged, and today we leave. I've lived and worked in this beautiful country for just 9 months but I've taken hundreds of pictures, was taught the Haka (to which I didn't do justice), caught a glimpse of orcas, BBQ'd for Christmas, driven a van (!), and met amazing people - so this isn't a goodbye merely a see you soon! ❤️ thanks to Naomi, Harrison and @johanna_of_arc for the chocolate and zoo adventures, to @kathrynpumphrey, @dc_simon_ @catherineputt @missbethanycollins @jazzkrabbe for being the best travelling family I could have wished for, I have the best memories of our hysterical laughter and crazy dancing, to my darling @marie.sal_ for chasing each other around the country and always finding our way back together for tea and cake 🍰, to Laura (and Rodri 😍) for our weekly Mexican dates and too many tequilas, to @remco.89 you are the danger, to my Marion lovelies @caittyler @canellequiri @elliesmeets and Ben I can't wait to see you again, to @sidilse and @linny_4 I'll miss the laughs, the teamwork and a cheeky French toast lunch, @keegan_thomas7 for the intense film chats and @gracie_amitrano @lebondani_ and @jodiewarren for the hilarious wine gossips, @beachhouseandkiosk for the quiz every afternoon, @edwinclmnt for the best roadtrips and kinda dangerous fire twirling and I can't wait to do it all again in the UK 🤘🏻, to @itsjennacidebaby @liammurray27 @j_bellajade_adventures @richreiss and @franc.emily you were my home away from home, I will miss the perplexing YouTube videos 😂❤️ to @peahs and @livadams_ for the beach trips, Six60 and nearly losing the car keys, to @vve_chloe for Harry Potter haha ⚡ to the lockdown family @pip28 @oriol_sans @annac.ma @willroberts_ and David for the racing demon rage and où est la bouche and to the person I met on my second day in NZ, @gaylordszt the king of the chocolate cake and shadow pictures, these last few months with you have been a dream and I can't wait for the future ❤️ Goodbye to the Land of the Long Cloud, it's been a pleasure 💕 #newzealand #travel
An Ode to windy Welly 🌪️ So many sunrises, margaritas, jugs of sangria, amazing restaurants (plus now best friends with the chef 👀) tacos 🌮, beach trips, BBQs, and all those hilarious, weird, wonderful people who have made my time here so special 💘 Now a new adventure awaits! #wellington #travel #newzealand #foodblogfeed #foodblogger #imoffonanadventure
On your days off some people might go for brunch, go for drinks, get out of town, I on the other hand baked these cheese scones twice. Recipe on my blog link in bio and soon you'll be neglecting your social life to bake these scones everyday too 😏🤤 #cheesescones #whatsociallife #foodblogger #feedfeed #foodblogfeed #newzealand
When in NZ find a nice boy who's happy for you to sit on his lap for an hour and would rather look at you than the beautiful view 💕☺️ @gaylordszt (📸: @elliesmeets @caittyler )
Oh December, what a merry month you were, Christmas Day feast with da bros / South Island beach dreams (before those horrific burn lines appeared 😬) / ma bae's masterpiece, a Bruce Bogtrotter chocolate cake covered in strawberries / partying with this lovely mad crew at work / Christmas croissant pudding with nectarines and blueberries / sunsets and fireworks, and starting 2020 with the first of many drunken nights with this wonderful human 🌹 @gaylordszt #newzealandchristmas #travel #wellington #brucebogtrottercake #breadandbutterpudding #newyear
I feel like I'm cheating on traditional Yuletide food with all these flirty strawberries and apricots around. Strawberries at Christmas time, whatever next. Chocolate chip panettone, Christmas cake ice cream bedecked with roasted summer fruit, recipe now up on my blog 🍓🎄 link in bio #newzealandchristmas #summerbreakfast #christmascake #itfeelslikejune🎄🎅🏼
%d bloggers like this: