When I first moved in with Calum and two of his friends three years ago I would waste a lot of time pottering around their kitchen, whiling the time away between my two badly paid part-time jobs. Although one of these jobs was as a baker, the baking didn’t fulfil me as I would find myself baking brownies, blondies and other brazen confectionery as soon as I got home after an hour commute to Derbyshire, of all places. My favourite cake was by far the most simple – which is probably no coincidence, simplicity is all you require when craving fudgy, chocolatey stodge. Bish bash bosh, in the oven, done. It was only a matter of minutes until it is slid from the tin, steaming on a plate and gently sliced open to reveal a molten, gooey centre. This cake was Izy Hossack’s Swedish Chocolate Cake which has incidentally been copied dozens of times, due to it being so good and so damn easy. Calum and I would cut out large wedges of cake, plus a drizzle of cream for me, and hunker down with plates and spoons, scraping the plate clean of all that molten chocolate. This baking malarkey passed the time very enjoyably, and all too soon I realised cookery school was my only next step, so I packed in those two disappointing jobs and off I ran into the sunset of Leiths and knife skills and sensible footwear.

Three years later and I’m still wasting time. Baking – or, otherwise known as procrastibaking – is the ideal way to spend an afternoon. Forget Netflix, forget socialising, march into that kitchen and bake a cake. The issue is that I’m not particularly adventurous. I’m not advancing my skills, not practising piping, mirror glazes or fancy multiple-tiered creations, I am returning to the memorised recipes with only five ingredients, the one-bowl wonders, the easy and the bish bash bosh. Izy’s Swedish Chocolate Cake still hits that sweet spot. And, I’m not a particularly demanding person but if I want cake I usually want it NOW.

So please, join me in this time wasting endeavour. This chocolate cake is craggy with a surface made of paper-thin shards. When it’s hot and you cut out a large slice the soft, gooey insides ooze out, then when you return for seconds it’s cold, sticky and fudgy like a brownie. Effortless to make it only requires five store cupboard ingredients, a saucepan and, crucially, patience while it bakes. When you’re sitting there with a slice of cake, you realise time wasting really isn’t that bad. 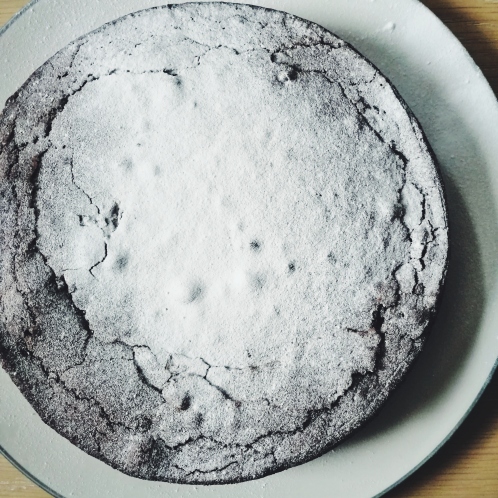