If a positive start to the year is an increase in productivity then mine is going badly. So far I have eaten three chocolate chip cookies straight off the baking tray and dozed in my bed, bundled under the covers like a hibernating bear, even though the sky is a perfect shade of periwinkle blue. Some days just need to be lazy. I’m in recovery after all. Christmas was exhausting.

Although the general picture of Christmas was different, the essence of it will always remain the same – good food, great company, festive cheer. My housemate Jenna transformed the living room into a Christmas explosion with almost militaristic enthusiasm, complete with stockings on the walls, tinsel draped over picture frames and a Christmas tree with all sorts of colourful lights. Gaylord donned a fetching Santa hat with flashing stars around the brim, as if we needed reminding ‘It’s Christmas yo!’

As for the food, I was out of my comfort zone. Whoever knows me and my eating habits appreciates how much I love stodge. Hearty warming stodge. Christmas is my season for gluttony as I can consume stews, pies, puddings, you name it, with abandon. However, a New Zealand Christmas requires a barbecue. A delicious Christmas salad anyone?

We all like to eat a lot at this time of year. But even when the sun warms your bare arms and you have to apply factor 50, food is still top of the agenda. Christmas Eve was a day of tracksuit bottoms and a kitchen takeover. I holed myself next to the oven and baked brownies (this time making sure the oven was on, let’s not think about that previous occasion), fried French toast, stirred spiced sugar syrup, roasted peppers, chopped onions, chillies, tomatoes, coriander, and sliced croissants, filled them with apricot jam and squashed them into a cake tin. 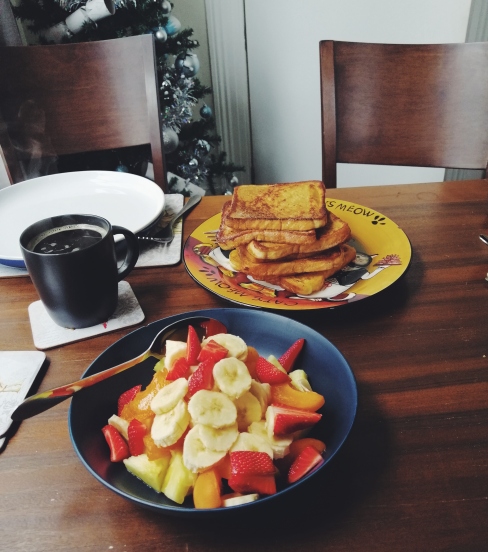 That night was Christmas 1.0. The French, and many other nationalities, celebrate Yule-time on the 24th, perplexing to us English (it’s called Christmas Day for a reason) but we happily came together for a big multi-lingual celebration (where the English drunkenly attempted to speak French and ended up repeating ‘Marecee boucoo’ to anyone who would listen). We all piled into the garden and lit the barbecue. Gaylord loaded the grill with dozens of chicken wings which I had generously massaged with a sweet-salty barbecue sauce and they sizzled away furiously dripping juice and charring, while we knocked back glass after glass of sangria adorned with floating blueberries.

The culinary masterpiece of the night though was Gaylord’s cake. This chocolate beast, in the nicest sense of the word, is his tour de force, the cake he bakes for family, friends, birthdays and Christmas. This time he doubled the recipe. 12 eggs were harmed in the making of this cake! Two sponges were sandwiched with dark chocolate ganache and chopped strawberries, then drenched with glossy chocolate. It towered over the bowls of salsa, guacamole and chips, it’s topping of pert strawberries bringing to mind mini Santa hats. The sponge, full of all those eggs, was feather light, melting on the tongue while the ganache brought a lip-smacking punch of chocolate. It was demolished by Boxing Day. No strawberry was left alive.

Many people are accustomed to the Christmas hangover. I can’t say I’ve ever experienced a hangover on Christmas Day. Until now. That said, the next morning (after dragging myself through the shower) I jumped into action, boiling new potatoes and roasting them with dried rosemary and butter, slicing fine slivers of fennel and peeling paper-thin pieces of Parmesan. These I tossed through a salad of greens and avocado, ready to be dressed with lemon and oil later. I even determinedly cleaned the barbecue, after all Christmas is a time of giving.

Christmas 2.0 was hosted by my friend Laura. Her house is perched on the edge of a mountain in Wellington which you have to reach via cable car (yes. I know. She has her own personal cable car. It might as well be a roller coaster how excited I get). Her front windows display a panorama of the bay, the blue sea and the hunched outline of Miramar. We ate in front of this view, the table laden with salads, potatoes, cold chicken and ham, salsa, bread and cheese. We ate and ate, the table of bounty never appearing to reduce no matter how much went on my plate and in my mouth.

Although we were comatose and, once again, a bit drunk from Buck’s Fizz, we devoured dessert. I warmed it in the oven before presenting it to the table – croissant bread and butter pudding, stuffed with nectarines and blueberries and served with a pile of melting vanilla ice cream.

I may stand in the minority here but I love Christmas pudding. It tastes of December to me, full of spice, rich currants, sultanas and mixed peel, the slight hit of brandy, especially as my dad proudly makes his own each year, storing it in our cold hallway until the day arrives. So a summer Christmas dessert couldn’t just be a fruit salad or a crumble, it had to stand shoulder to shoulder with the proud desserts of the Northern Hemisphere, and maybe help create precious festive memories. Here in New Zealand, they love a good trifle, pavlova or anything sweet topped with cream and summer fruit. That’s all well and good but I miss my stodge. So this refreshed, lightened version of one of my favourites came into being. The croissants were soft and yielding with custard and apricot jam yet crispy on top. The berries and nectarines became jammy and juicy in the oven, their flavours sweeter.

It may not be a traditional Christmas but thanks to the excellent company and delicious food I liked it very much.

Croissant pudding with nectarines and blueberries

I made this pudding in a baking tin so it resembled a cake but it may be easier to make in a baking dish, especially as some spring-form tins don’t hold liquids effectively. If you choose to make it in a baking tin, line the outside of the tin with foil to catch any runaway custard. 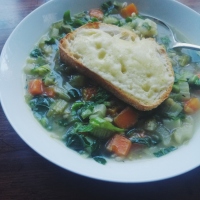 January is tough so marinate a steak in citrus juices and coriander and garlic, fire up a skillet and cook until nicely charred. Serve over nachos with all the tinsel - guacamole, salsa, pico de gallo, lots of melted cheese, and some pickled shallots and jalapenos. Pretend you're on a sunny holiday not stuck in 0°C huddled under a blanket as you work. Perfect to share or to keep entirely for yourself. No one's judging.
I will now always recommend making a chocolate cake on a Sunday afternoon to snack on throughout Monday, it really eases those Monday blues. And I can't even take credit for this idea. @gaylordszt chocolate cake, which is basically soft melt-in-the-mouth chocolate mousse, only improves with time, getting stickier and more tender and it's covered in a thick blanket of chocolate ganache which also really really helps.
When the fridge is empty and the radiator is broken it's a takeaway, fluffy slippers and contemplating moving house kind of night and meanwhile I'm lusting after this jam sponge and custard I made after crimbo.
Pre-Christmas caramelised white chocolate and fig biscotti and a window sill and a plant. Best lighting is by the plant.
Beetroot, bulgur, chilli and nigella seed rolls, all scruffy and lopsided in crispy pastry, really easy eating for lazy whichever days they are after Christmas 🥴
Another day, another bowl of porridge and this one is Christmas themed! Stewed plums, honey, crunchy flaked almonds and a spontaneous spoonful of homemade mincemeat, gently warmed in the microwave. Turns out it will be a daily addition I think! Even after xmas probably.