November in Toulouse is not nearly as austere as other parts of the northern hemisphere during late autumn. The sun glitters through next door’s hedge, the sky is a spotless azure (most of the time), the leaves are gently turning from green to red, and, in fact, it’s colder inside than out due to a broken boiler and the classic French method of fixing it: wait for the problem to go away.

Maybe it’s the cold that’s made me focus on eating well. Meat and cheese, and pancakes spread with Nutella are the best methods for keeping warm. Or it could be the endless days of confinement. Whatever the reason, there have been excuses to sit on the sofa with Gaylord, the two of us sharing a big bowl of homemade chocolate mousse (for four people!), declaring we couldn’t eat another mouthful but inevitably going back for more ten minutes later.

It is a problem. This blog post should really be about a salad or a diet programme, but instead it’s about dessert for breakfast.

This is the second half of my breakfast showcase. Cue jazz hands and a line of grinning chorus girls! Let’s admit it, the sweet breakfasts are why we’re here. French toast, crêpes, teetering stacks of pancakes; they are why brunch exists.

All sweet breakfasts are essentially a sweet vehicle to show off the stars – the toppings. These can be anything in your fruit bowl, or lurking in your cupboards, in your fridge – berries, banana, peanut butter, jam, Nutella… Simmered, spread, dolloped; toppings can transform that homely piece of toast, a bowl of porridge, or some egg-soaked bread into an indulgence.

Now, to admit my downfall: pancakes. I love pancakes as much as the next person – give me a plateful and a fork and you’ll watch them disappear as if by magic. While researching and trialling recipes for this blog post, however, I discovered the pancake to be a maze of avenues, secret pathways and hidden opportunities. Pancakes deserve a whole blog post, which I will write imminently. (I initially planned to include the Dutch baby pancake as a fluffy, cuddly stand in but my god I was disappointed! Rant included in the pancake post).

Ladies and gentlemen, make yourselves comfortable, the show is about to begin…

But, naturally – what else?

French toast is the café staple adorned with coulis and crumble, and the easy homemade remedy to keep the kids quiet, duly drowned in maple syrup. It is the epitome of brunch. An easy, soft, creamy base, ready for any toppings you wish – in this case, apples and pecans to complement the maple syrup of tradition.

Pros: I’ve discovered the way to cook French toast. Surprisingly it doesn’t involve butter which unfairly burns, just big, unreasonable glugs of flavourless oil. This creates custard-soaked insides nestled in a golden, crispy crust. Dusted with cinnamon then topped with mound of buttery (butter had to be included somewhere) maple apples and crème fraiche, this breakfast is a café extravagance at your kitchen table.

Cons: Sautéing apples on a lazy Sunday might be my idea of fun, but I understand it’s not everyone’s, especially when the Nutella jar is within reach. Ideally, spongey white sandwich bread is best but if you have standards you can use baguette, just soak it for longer to penetrate the crust.

How-to: Chop an apple into wedges. Melt a knob of butter in a frying pan and, once sizzling, add the apple. Sauté for a few minutes then add roughly chopped pecans, a shake of cinnamon and a good squeeze of maple syrup. Lower the temperature and leave to cook, stirring occasionally to stop it from burning, until the apple is soft. Beat together eggs with a splash of cream or milk, a sprinkling of cinnamon and a teaspoon of sugar. Soak your slices of bread for a few seconds each side. In another frying pan, generously pour in the oil and turn on the heat to medium. When you think it is hot, add a drop of egg mix; it should immediately sizzle. Fry the French toast on each side, and once puffed and golden, rest them on a plate lined with kitchen paper. Sprinkle with cinnamon sugar. Serve topped with your caramelised apples and crème fraiche.

Porridge has had its revolution. Somehow it jumped from Dickensian gruel, to Ready Brek, to a fashionable meal with restaurants and recipes dedicated to it’s craft. I don’t think Dickens expected gruel to be Instagram-worthy. For me, porridge is an essential option for a winter’s breakfast. If cafés just serve it ‘with seasonal fruit’, like the porridge-snob I am, I know they haven’t unlocked its full potential.

Pros: It warms my cockles like nothing else! During cooking, chopped banana is stirred into the mixture, quickly softening and adding a creamy sweetness. The surface is dotted with pockets of molten chocolate, which is a naughty reminder that porridge isn’t just for the health-conscious.

Cons: Is porridge really a weekend indulgence? Where are the waffles and pancakes?!

How-to: The recipe is 3:1 liquid to rolled oats. I tend to use one cup of milk and two of water. Add it all to a non-stick pan and set the heat to medium-low. Stir gently until it starts to simmer, then add a pinch of salt and a shake of cinnamon. As it thickens, throw in half a chopped banana per person and stir constantly. Once velvety and thick, pour into bowls and top with the rest of the banana and a couple of nuggets of dark chocolate. Sprinkle with a little granola for crunch.

If you google ‘bostock’, the internet will find you a famous football player. When you add ‘recipe’ to the search it will come up with lots of delicious pictures of brioche topped with frangipane, almonds and fruit. Allegedly a French recipe, it seems fitting to bake it in my Toulouse kitchen.

Pros: Eaten warm from the oven, the pears syrupy and the chocolate molten, it oozes vanilla-scented frangipane, but it’s actually even better cold, eaten with your hands like a treat from the bakery. Similar to a rustic tart, the brioche is it’s casing, supporting the soft frangipane, chocolate and pear filling.

Cons: It’s a fiddly one, I’m afraid. If you think frying apples for French toast is bad, then here you need to make frangipane, melt chocolate and stir sugar syrup. It’s a bakery production line on a Sunday morning.

How-to: Preheat the oven to 190°C. In a saucepan, cover 50g sugar with water, add a splash of vanilla extract and set over high heat to boil and reduce (2-3 minutes). Meanwhile, beat together 80g sugar and 80g soft butter together until fluffy. Add an egg, 75g ground almonds, 2 tsp plain flour, 1 tsp cornflour and 1 tsp vanilla. Beat to combine. Melt 50g dark chocolate. Peel and slice a pear into wedges. Brush two slices of brioche with vanilla syrup, top with a thick layer of frangipane, drizzle with melted chocolate and spread the wedges of pear on top. Pop them on a baking tray and bake for 20 minutes until the frangipane is well-risen.

I think everyone has a weakness for pastries. Coffee shops and cafes fill their glass cabinets with pains au chocolat, pains au raisin, Danish pastries studded with fruit, swirls, turnovers, and they all disappear before lunch.

Here, the crisp, flaky sugar-speckled pastry, albeit not entirely homemade – it is breakfast after all, does anyone endeavour to make their own Danish pastry in the morning – is laden with juicy raspberries and topped with a creamy blob of crème friache.

Pros: Effortlessly easy, this is the breakfast for a lazy morning. You sip coffee as you pile raspberries onto pastry circles, watch them bubble and blister in the oven, and then they emerge golden and sparkling with sugar. Best make two per person, these disappear in only a couple of mouthfuls. To make matters worse, they are delicious with any soft, juicy fruit – try strawberries, blueberries, plums, or peaches.

Cons: The sugar-crusted edge can catch and darken easily so keep your eye on the oven. And, if we’re being pedantic, shop-bought puff pastry isn’t quite the same as a squidgy Danish with a custard filling but who knows what chemicals are involved in those.

How-to: Preheat the oven to 200°C and unroll your puff pastry sheet. Using a bowl as a stencil, cut out some circles. Mark a smaller circle inside each, creating a border and put the discs on a lined baking tray. Mix together raspberries with enough apricot or raspberry jam to coat and fill the inside circle. Brush beaten egg around the border and sprinkle with granulated sugar. Put the tray in the oven and bake for 15-20 minutes, until the pastry is puffed and golden. Serve with a spoonful of crème fraiche.

It’s been eye-opening to explore breakfast from this new perspective. So much of the time, I sleepily pour myself cereal and eat it before I think of the other options breakfast offers me. For me, out of these four, it is a tough decision. If I consider a sweet start to the day as dessert for breakfast though, I would have to say the berry pastries would be my choice. Perfectly indulgent, easy to make in your dressing gown, and so moreish you’ll eat it straight from the baking tray. I can tick something off my list. The perfect breakfast is here, guys! We just have to use our imaginations. 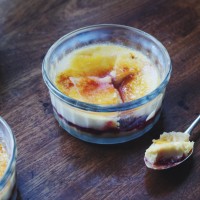 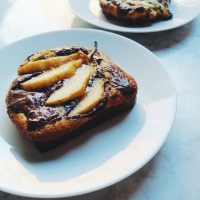 Lil baby éclairs for choux pastry week on @sundayafternoonbakingclub
I think lockdown has made me more excited about veg than usual.
Belgian buns in the sun ☀️😎
Salmon paddling in a nice bath of butter and adorned in all the lemon, capers and herbs I could find. Quite the salmon makeover.
Good morning ☀️
Is there anything more flamboyant than a baked alaska?! It's basically three desserts in one after all!