It sounds rather dreamy, doesn’t it? Paris and pastries! The picture-perfect image: sitting in front of the Eiffel Tower with a couple of eclairs.

Well, I’m going to have to abruptly halt this iridescent idea to first say there were no visits to the Eiffel Tower during this trip to Paris *sob*. Although we did mooch around the eerily quiet city on a number of days, taking pictures of the husk of Notre Dame, sniggering at Instagrammers posing as they looked thoughtfully over the river for their photographers ahem I mean boyfriends, and we huddled together under an umbrella as we splashed through puddles to find a specific patisserie for our very particular needs. Oh yeah, it rained a lot.

As I said in my previous post, I was popping pastries in my mouth like Bruce Bogtrotter destroying his chocolate cake – by the fistful. Within a few short days, I became an expert, detecting the subtleties in texture and flavour, lusting after the tangy bite of fruit amidst the crème pâtissière, and licking the last smear of hazelnut cream from my fingers. Thus, I started a rating system: 1 being a sad, sorry excuse for a French pastry and should be widely shunned, to 10, a masterpiece, along the lines of Michelangelo and Da Vinci in pastry-form.

Most often we favoured our closest boulangerie for our sugar-fix, simply for the convenience rather than its mastery. However, on the same street was the boulangerie Durand et Fils, which, in 1910, created the widely lauded Paris-Brest in honour of the cycling race ‘Paris-Brest-Paris’. Today, they continue to bake and fill those pert little choux pastries, full of praline crème pâtissière, using the same 110 year old recipe. So, us buying Paris-Brests there on multiple occasions was not a just a mere convenience but an essential.

So, without further ado, let me whisk you away to Paris for a sugar-crusted analysis adventure…

Those of us who watched the Great British Bake Off might recall the Charlotte Russe or the magestic Charlotte Royale – elaborate French desserts of mousse bound in sponge fingers or swirls of roulade. I’ve never attempted to make or even eat one of these beauties, and then Gaylord introduced me to the mini version.

On first inspection it reminded me of a pretty Artic roll, adorned with raspberries like a sweet, juicy crown. Behind a wall of sponge, a soft creamy raspberry mousse awaits, and meanwhile each of the raspberries is filled with coulis (raspberry-flavoured, naturally). Tart yet creamy I could eat bowlfuls of that raspberry mousse, however, in my childhood I developed an aversion to Artic roll. Despite its sophistication beyond the dessert from my school lunches, that chewy roll of sponge caused too many negative associations.

‘Bisous’ in French means kiss, and what else would you call this pouting beauty?

On that wet, miserable day, Gaylord and I were hunting for a fancy patisserie to buy dessert for that evening’s dinner with his family. The first we found wasn’t a bakery at all, rather a pastry showroom if there is such a thing, so Gaylord led me through a maze of streets to find Fauchon; the swankiest patisserie I’d ever seen hidden inside a gourmet restaurant. Dim mood lighting set the tone, as did the assistants in designer clothes with manicured nails, and Gaylord and I shared the obscene cost of two Bisou-Bisou and three eclairs – 60 euros (!)

A bisou-bisou is a mound of sculpted mousse, filled with two layers of sponge and red fruit confiture, and there is a light dusting of pink over those plump lips, giving it an artful matte look which I’d love to find in a lipstick. However, despite the beauty, the simplicity, and that outrageous cost, these lips did not live up to the expectations. The mousse to sponge ratio was excessive, meaning there was very little to chew. And as Gaylord’s sister said, just from eating it she wouldn’t have known it had come from such an expensive patisserie.

We ate a lot of éclairs. They are Gaylord’s favourite, and while they have not always been mine, I have been introduced to a real French éclair and have since atoned for my ways.

The éclair needs little introduction as, after all, we all know them. While in the UK they are filled with cream, in France their filling is piped crème pâtissière, enriching the flavour. I think I was rather shocked to see a chocolatey centre at first; shocked yet delighted. In posh patisseries especially, you’ll find them with a crisp shard of chocolate balanced on top of the sparkling ganache.

Of course, chocolate eclairs were the best and the most frequently consumed, however, I did try caramel and coffee, the latter of which was rather strongly flavoured, but would be a very satisfactory substitute for my afternoon espresso.

While patisseries and boulangeries across the country can conjure up a decent Paris-Brest, we bought them on at least three occasions from the bakery of its origins.

Now, I must admit the picture here is not of that original sacred Paris-Brest; it is, in fact, a knock off from our local in Toulouse. However, that’s not to dismiss this fine excuse for a pastry. Although, naturally, the original is better, albeit less photogenic.

Paris-Brests were notorious for their association with the cycling race and were piped in circles to mimic the wheels of the bikes. While Durand et Fils created big sharing wheels, also known as a choux (literal translation: cabbage), their individual portions are squat oblongs, rather like plump éclairs. The choux pastry is cut in half and filled with praline crème pâtissière. Sprinkled with slivered almonds and icing sugar, it is so simple, rustic and, quite frankly, enormous, and the perfect afternoon snack.

Somehow fraisiers had passed me by until I moved to France. This year, I had my first fraisier and realised what I had been missing.

Strawberry creamy desserts were never at the top of my list – which is ridiculous considering how much I love a scone with clotted cream and jam. Notorious as a celebration gateau, a fraisier sandwiches a thick, creamy layer of mousseline lined with heart-shaped strawberries between two pieces of sponge. In my petit version, there was only a biscuit-thin sliver of sponge supporting all that indulgent topping, yet hidden inside was small cream-softened sponge surrounded in strawberry confiture. This gave it more bite, while the strawberries added that essential sweet-tang needed to balance the flavours. Indulgent and sweet, something to chew, and most importantly, not outrageously expensive, the fraisier was the perfect dessert.

It’s a tough call between the Paris-Brest and the fraisier, but as both are so different I am going to say it’s a tie and duck out of any difficult decision making.

After those weeks of endless mousse and crème pâtissière, I ended up with a craving for fruit. Although, who am I kidding, there will always be room for another pastry. 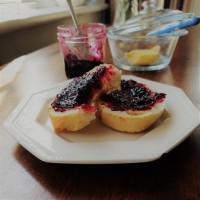 Trout and all the citrus fruits (except orange because Lidl only sell them in a bag of 10 which is excessive in my opinion) so there's lemon, lime and beautiful ruby grapefruit, plus rings of shallot, then loads of olive oil and oregano to remind me this is the Mediterranean depsite all the rain that seems to follow me everywhere ☔ 🐟🐟🐟 once baked there was the most delicious citrussy juice in the pan which was mixed with the couscous dressing which was served alongside. Bish bash bosh done, and was really really good 🍊
Happy birthday to @fimitchy my beautiful, mischevious, hilarious sister, my best friend and kween 🥰👸💁🏼‍♀️ happy 28th birthday Bunny! ❤️
This was my favourite sight of the summer... Yes the beach and sun were heavenly but it really doesn't get better than seeing a box of fresh pastries from the boulangerie, and then greedily devouring them.
A very messy falafel sandwich, it all fell apart as I ate but I think that's a prerequisite for a really good falafel pita.
Defying the weather and logic with pan con tomate with lots of olive oil, black pepper and garlic, and cucumber bean-sprout salad with basil, soy and lime, and some avocado with a splash of balsamic (which I can't claim any credit for, it's all @gaylordszt )
Brekkie, inspired by my bae Nigel Slater, is bircher muesli filled with strawberries and orange and lots of yoghurt, topped with some extra and nicely tangy balsamic strawbs